The Extended Validation Code signing certificate offers the highest level of security. For programmers developing applications for Windows 10/11 EV Code signing is the most suitable certificate. The Code EV certificate is delivered on an external hardware token, where the keys for signing applications and code are located. The USB token is sent directly by the certification authority to the applicant's address and access to the keys is protected by a PIN. EV Code Signing certificates resolve developers' trustworthiness in the Windows SmartScreen filter.

The best selling CODE signing certificates from our offer

The CODE signing certificates that we can provide for you

Signed software protects customers from malware and other malicious threats. A digital signature protects and reassures customers that the integrity of the code they have downloaded is ensured and that the program is intact, not damaged, or altered in any way. Increased trust promotes better user perception of the application.

Once downloaded, the user is sure that the code obtained actually comes from you as the publisher, which ensures the company's reputation. Code Signing Certificates allow customers to identify the author of a digitally signed code, making sure the program is from the company that is expected.

The offered Code Signing certificates can be used for Windows, MacOS and iOS operating systems without any problems. All certification authorities work with companies such as Microsoft or Apple and follow their recommendations and policies for issuing certificates according to the CA/Browser Forum.

Customer experience is the first and foremost priority for us. The selected SSL certificate is not suitable for your needs? Do you want another one? Or do you just want to cancel the order? We offer 30 Days Money Back Guarantee for all our customers. Check out our Refund Policy to know more.

Nowadays, using a Code Certificate is the only way to distribute applications securely and trustworthily over the Internet. If you don't need to solve Windows SmartScreen (see below) we recommend to choose SECTIGO CODE Signing certificate at a good price.

We have compiled the basic information you are most interested in.

What is a Code Signing Certificate?

When customers used to buy boxed software, they had the practical certainty that the software on the included media was genuine. They had all the information at their disposal, including a manual and contacts to the developer. With the rise of the Internet and downloading software, this has not been the case for a long time and it is necessary to secure the software so that the customer has a certainty that the program he downloaded was released by the expected developer/company and was not intentionally altered. All this is ensured by Code Signing certificates for code signing, which are used to protect software distributed via the Internet. Also called Code signing certificate or Digital signature certificate.

Example of the difference in the installation of an unsigned and signed program using a Code Signing certificate.

By signing the code, the user is assured that the software actually came from the publisher who signed it, has not been altered or damaged since it was signed. By signing their code, developers build a trusting relationship with users.

Who needs a Code certificate?

Any software publisher that plans to distribute code or content over the Internet. Codes distributed within the company over the intranet should also be signed due to operating system policies such as Windows and MacOS. All modern systems prefer signed code to protect users and prevent the spread of malicious software.

Signing the code does not change the software. It only appends a digital signature to the application's executable file, which provides enough information to verify the identity of the signer as well as ensure that the code has not been changed later.
Digital ID signing allows content publishers, including software developers, to sign content that includes software objects, macros, device drivers, firmware images, updates, configuration files, or other types of content for secure delivery over the Internet.

What is Windows SmartScreen?

SmartScreen Reputation is a Microsoft tool that provides anonymous data from the community to ensure the user's security when downloading files from the Internet. It is an imaginary security guard in the Windows ecosystem. Only Microsoft knows the exact operation and assessment of reputation, and SmartScreen can give developers a hard time. 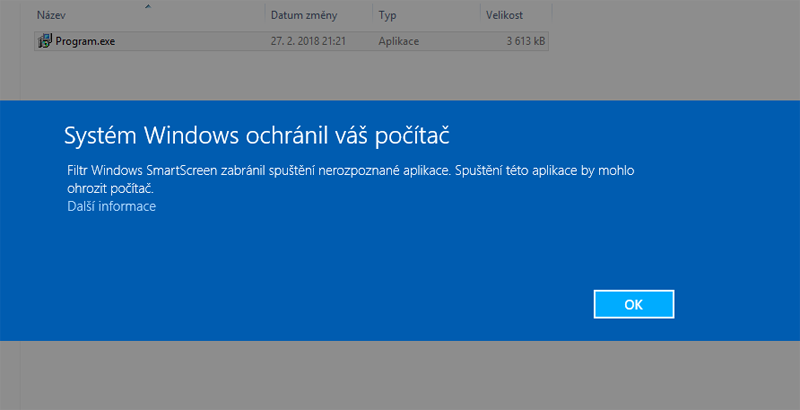 With the EV Code certificate for signing the code, SmartScreen Reputation does not have to solve the problem and distrust, and the application passes the reputation filter without any problems to the installation dialog, where the program’s name and publisher are displayed to the user. Obviously, an increase in reputation for SmartScreen cannot be guaranteed. If the goal is to avoid SmartScreen, the only solution is to order an EV Code signing certificate.
The Code Signing EV certificate also requires the Windows Hardware Developer Center Portal to sign kernel mode drivers.

We would like to remind you that we are obliged to obtain your consent to the use of cookies, which we store in order to enable you to use the website comfortably, measure traffic and also, for example, monitor the proper functioning of our website. We will be happy if you help us with that.

Click on "Settings" to select the groups you choose.

Preference cookies allow the website to remember information about setting preferences for the next visit (eg username, region, language).

Statistical cookies help us understand the behavior of visitors. They inform us how the website is used and allow us to improve it. They collect information about the use of the website anonymously.

Marketing cookies are used to display targeted advertising while you browse the Internet. This option makes your display ad more relevant and does not affect the number of ads you run.