To work with certificates, you need to have the OpenSSL library installed. See the OpenSSL for Windows and Mac OSX page for instructions and download links.

A sequence of two OpenSSL commands separated by a "|" character is used to compare keys resulting in a character string that must be the same for both keys. In this case, the tested keys belong together.
The following commands should be entered one after the other to generate separate outputs. The output is an md5 hash (fingerprint) of the key, it can be replaced by the sha256 algorithm, which, however, gives a longer string of characters. You can name the file extensions as you need and you are used to, for example .csr, .crt, .txt.

Comparison of the private key and the issued certificate: 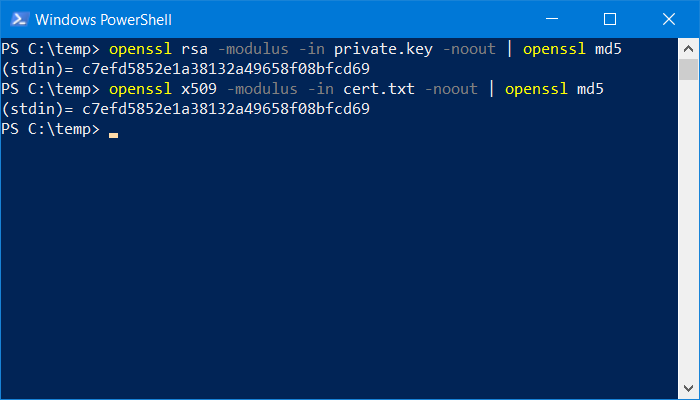 Display information of the issued certificate

Use the x509 command to check the issued certificate and its information. This can verify that the information in the certificate is correct and matches your private key.

The output is a complete overview of the information of the issued certificate, including validity, expiration and data about the domain, or for corporate OV SSL certificates information about the company 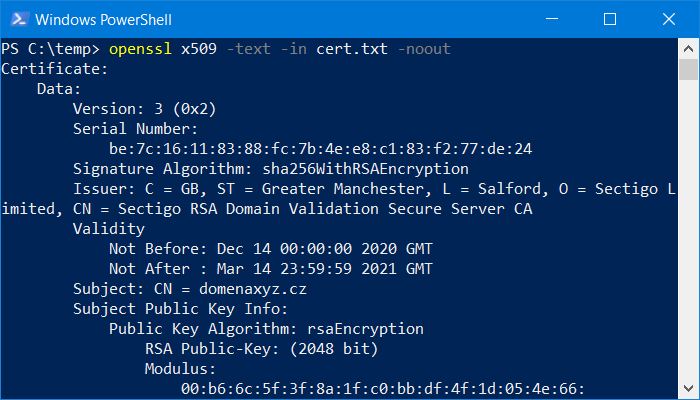 Back to Help
Found an error or don't understand something? Write us!

We would like to remind you that we are obliged to obtain your consent to the use of cookies, which we store in order to enable you to use the website comfortably, measure traffic and also, for example, monitor the proper functioning of our website. We will be happy if you help us with that.

Click on "Settings" to select the groups you choose.

Preference cookies allow the website to remember information about setting preferences for the next visit (eg username, region, language).

Statistical cookies help us understand the behavior of visitors. They inform us how the website is used and allow us to improve it. They collect information about the use of the website anonymously.

Marketing cookies are used to display targeted advertising while you browse the Internet. This option makes your display ad more relevant and does not affect the number of ads you run.